Having succeeded in getting a simple JBehave story running. my next challenge is to scale it up a bit. In particular, I want to get a JBehave story that integrates with Spring to do something more fully-featured: save an entry in a database.

END_OF_DOCUMENT_TOKEN_TO_BE_REPLACED 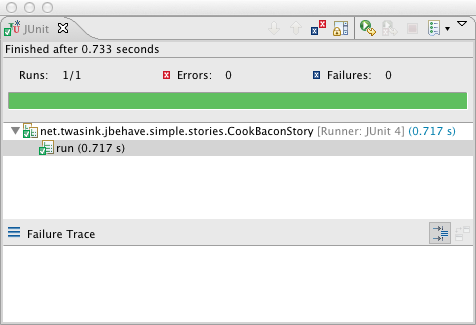 In the last segment, I managed to get JBehave reporting under Maven using a pre-canned example. This time, I want to tackle the other extreme – I want to develop a single story in JBehave and see what’s the bare minimum it takes to get it running, inside an IDE (in my case, Eclipse)/

END_OF_DOCUMENT_TOKEN_TO_BE_REPLACED

JBehave comes with some very comprehensive examples, so I thought I’d start there to see if I could get one of them building – and reporting – under Maven. The example I chose was the ‘trader‘ example, which you can see at github.

END_OF_DOCUMENT_TOKEN_TO_BE_REPLACED

A couple of years ago, I got the ‘specification-by-example’ bug. I was playing with this new project called Cucumber, and was really enjoying the idea of specifying examples in an English-like syntax that testers and BAs could supposedly read. (I say supposedly, because it never really took on at my previous place-of-employment. Which was a shame). Nonetheless, I enjoyed it, and advocated it when and where I could. Heck, if nothing else, it was an excuse to write support code in Ruby as a break from the Java stuff.